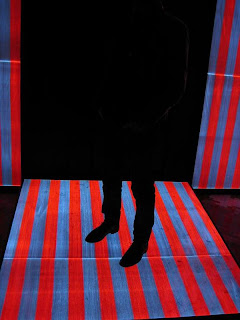 Son of a Brazilian record collector and Andy Warhol Factory patron, Marcos Cabral was brought into this world via Miami, Florida. It was his parents' relocation to New York's Catskill Mountain region (think Dirty Dancing) that would eventually lead to the formation of his DJ roots. At the impressionable age of 15 Marcos's parents landed him a job at a Catskill Mountain resort hotel as a DJ. This is where his growing obsession with hip hop DJ culture started paying off, DJing weekly, playing hip hop, house and latin freestyle.

After graduating high school in 1991, Marcos quickly discovered NYC's burgeoning rave scene, which lead to his acute appreciation for all things techno and house. By the mid 90's, Marcos found himself working at Satelitte, an NYC record shop which could easily be described as the center of NYC's rave asthetic. Pushing forward, Marcos then took a job at Syntax Distribution, one of the big three of american dance/electronic distributors. Being a Syntax buyer and seller played a large role in the development of electronic dance music in the United States. Making the rounds and paying his dues, Marcos also worked at Sonic Groove Record Shop, a world renown staple of techno and classic club music.

While living in NYC, Marcos dove deep into techno's abyss, finding an early open door into minimal techno long before it hit the big-time. This is when he developed his sound and used Trapez Recrods from Cologne, Germany as his outlet.

With the over saturation of "minimal" techno and a gross overuse of the word, Marcos moved on from the scene in which he helped mold and geared himself to a warmer house influenced sound that still rears it's head in his productions today. Over the past few years we've heard his Runaway moniker that he co-produces with friend Jacques Renault. Needless to say from their giant slew of chart topping releases, the Runaway sound has taken off. With releases on Mule Musiq, DFA, Rekids, I'm a Cliche, Wurst, Chinatown, Aus, Need Want, Play Out, Solar Disco, Spectral, and his own shared label On the Prowl, it looks like slowing things down is not an option.

Colleagues have taken notice, with many of his releases finding their way into top dj sets, everywhere from DJ Harvey to Prins Thomas / Lindstrom's Essential Mix, to Ivan Smagghe flatteringly putting two Runaway tracks on his recent Cocorico DJ mix.

Over the past couple years Marcos has lit up dance floors in Sweden, Germany, United States, Ireland, Scotland, England, Turkey, and France. His sets are quickly becoming legendary for his mixing style and skill....modeled after the classic house DJ's of NYC, Chicago, and Detroit.

With more pending collaborations with mentioned labels, saying that the future is a bright place for Marcos is an understatement. Go see and hear him DJ.

Posted by commecicommeca at 9:10 AM